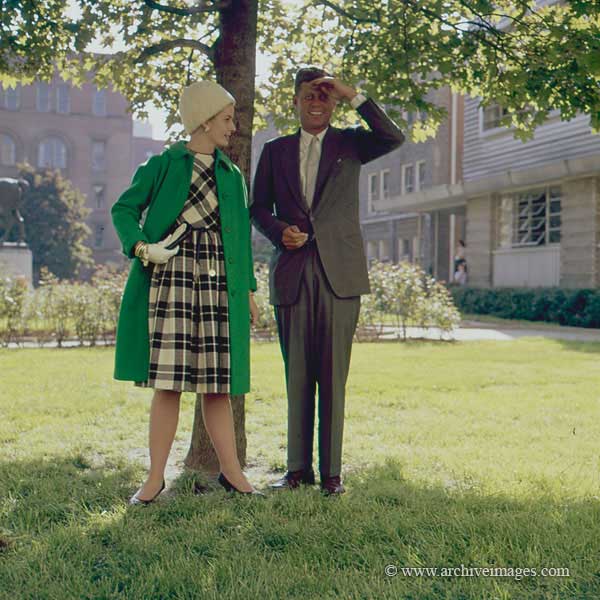 Glamour magazine did a college issue every year, which celebrated the top ten outstanding females from campuses throughout the country. For the 1960 issue, the art director, Miki Denhof, came up with the idea of photographing each state's Senator with the college winner of his home state. It was a huge undertaking. With 52 girls and 52 senators, Miki divided the job between Milton and four other photographers. Senator John F. Kennedy fell to Milton, who photographed JFK with the winner from Massachusetts. I think JFK gave them maybe 15 minutes, but they were all professionals and the shoot went off without a hitch. So much so that when Milton was assigned by Town & Country to photograph the young Senator and his bride, it was a friendly situation. TRUST.

Mrs. Kennedy asked Milton that if and when the need arose, would he be interested in becoming their personal archivist and he said yes. But when that offer was officially made, Milton had to turn it down. He couldn’t afford to be away from commercial work and his home in New York.
Excerpted from But That's Another Story, by Amy & Joshua Greene. Published by powerHouse Books.
No Comments »
Milton's Marilyn: Marilyn Monroe Marries Arthur Miller 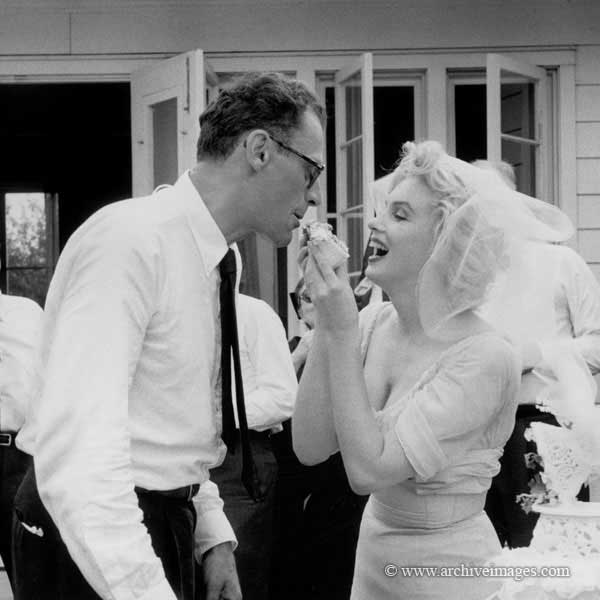 Arthur Miller and Marilyn Monroe were married on Thursday, June 28th, 1956. The reception was held the following Sunday.
Photo by Milton H. Greene.

Marilyn Monroe and Arthur Miller were married by a rabbi in front of Kay Brown's fireplace. Milton placed the traditional glass under the groom's foot, he shattered it, everybody yelled, "Mazeltov," and hugged and kissed. The twenty-odd guests, Arthur's parents, brother and sister, cousins, Milton's mother, Jay and Judy Kanter, George Axelrod, among them, moved to the flagstone terrace, where long tables had been set for the wedding feast. Milton, always comfortable with camera in hand, was twice blessed. He busily took still pictures and also shot a 16-mm movie of the festivities. Miller seems to be scowling in most of the frames. "Arthur was always scowling," says Amy. "I mean, I don't think he's been happy since the day he was born. And Marilyn was having a good time. If she was gonna do it, by God, she was gonna do it. She was effervescent. She was a bride." 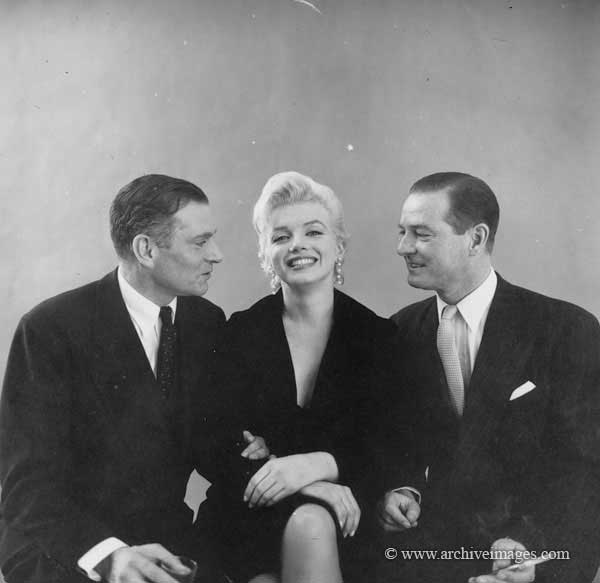 Sir Laurence Olivier, Marilyn Monroe and playwright Terence Rattigan are all smiles for photographer
Milton H. Greene during publicity photos for "Prince and the Showgirl"
Chance meetings at Gallagher's had nothing on her next celebrity introduction. "We were like two little fourth graders meeting their hero," Judy Quine says of herself and Marilyn at the prospect of meeting Sir Laurence Olivier. The actor-knight arrived in New York during the first week of February to publicize the premiere of Richard Ill on NBC. RCA had purchased the rights to his monumental film as a big promotion for color television, and for the first time a major theatrical film would be introduced on the small screen. During his visit he planned to meet with Marilyn and Milton to finalize their co-starring venture in The Sleeping Prince. Terence Rattigan, also in town for the meeting, would adapt his play, while Olivier had been lured into the project with the promise of directing and co-producing as well as co-starring.

They set the meeting at Olivier's hotel on the day of the telecast, a very rainy Sunday in New York. When Jay Kanter, who represented Olivier and Rattigan in America, arrived, Olivier offered gallantly, "It's such a bad day, we can't make her come here. We'll go to see her." So they all headed over to Sutton Place, where Milton greeted them at the door. "And we're all waiting for Marilyn, who was in the bedroom just too frightened to come out," recalls Kanter. "We waited, and we waited, and we waited. We waited a couple of hours. I'll never forget how embarrassing the whole thing was. Finally, with Milton's persuasion, she did come out, and Larry and Terence made her feel so comfortable."

In that particular case, the conflict, which prompted Marilyn’s pathological lateness, can be readily explained. "Pre-Milton, pre-star Marilyn is in worshipful awe of this actor and feels unworthy to be in the same room with him," relates Quine, "but the new Marilyn is going to talk about co-producing a movie in which they co-star and she wants him to like her and respect her talent. So which Marilyn do you get to be?" She stayed in that bedroom for two hours because the new Marilyn was working to make the old Marilyn worthy of going out and meeting Sir Laurence Olivier as an equal or co-star or human being.

When she did finally appear that day, Olivier later claimed, she had been so adorable, witty, and physically attractive they were at her feet in a second. Considering his reverence for punctuality, it is curious that he failed to see the incident as a harbinger of conflict to come. Indeed, congeniality prevailed when they reported to Milton's studio two days later for publicity pictures. Sitting side by side, Olivier right, Rattigan left, Marilyn in between, they bantered, bussed, and generally made merry for Milton's camera... 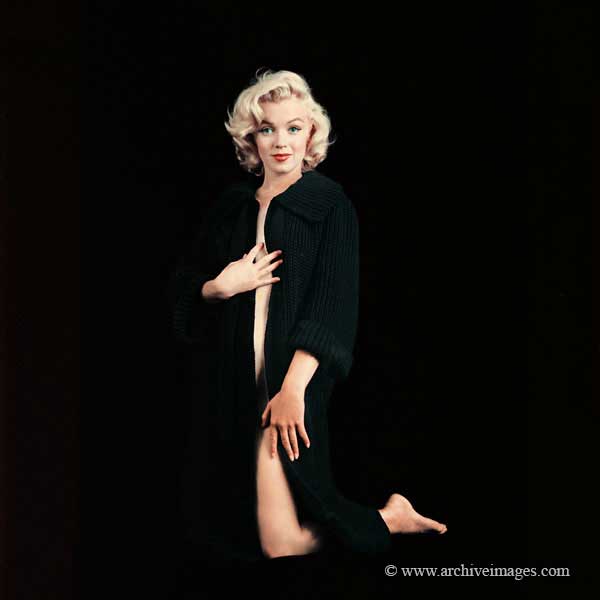 There’s another sort of man I’ve never liked—the sort that’s afraid of insulting you. They always end up by insulting you worse than anybody. I much prefer a man to be a wolf and, if he has decided to make a pass at me, to make it and have it over with.

First of all, a pass is never entirely unpleasant because men who make passes are usually bright and good-looking. Secondly, you don’t have to sit around with a wolf and listen to a lot of double-talk about income taxes and what’s wrong with the situation in India while he gets up enough courage to get into action.

Worse, though, than these double-talkers are the Good Samaritan pass-makers. These are the ones who are interested in my career and want to do something big for me. They are usually married men, of course. I don’t mean that married men are all hypocrites. Many of them are straightforward wolves. They will ask you straightforwardly to overlook the fact that they are wedded to wives who seem to adore them—and go on from there.

No Comments »
Marilyn Monroe's My Story: I Get Through The Looking Glass 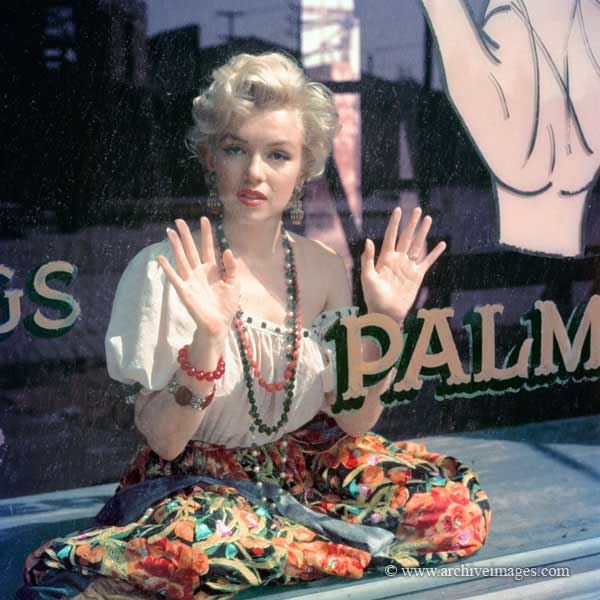 
In Hollywood a girl’s virtue is much less important than her hair-do. You’re judged by how you look, not by what you are. Hollywood’s a place where they’ll pay you a thousand dollars for a kiss, and fifty cents for your soul. I know, because I turned down the first offer often enough and held out for the fifty cents.


It wasn’t because I had moral ideas. Nor because I saw what happened to girls who took money from men and let men support them as their sweeties. Nothing happened to such girls that wouldn’t have happened to them anyway. Sometimes they got ditched and had to hook up with new lovers; or they got their names in the movie columns for being seen in the smart places, and this landed them jobs in the studios. Or, after going from love nest to love nest for a few years, they met someone who fell in love with them and got married and had children. A few of them even became famous.


It may be different in other places, but in Hollywood “being virtuous” is a juvenile sounding phrase like “having the mumps.”